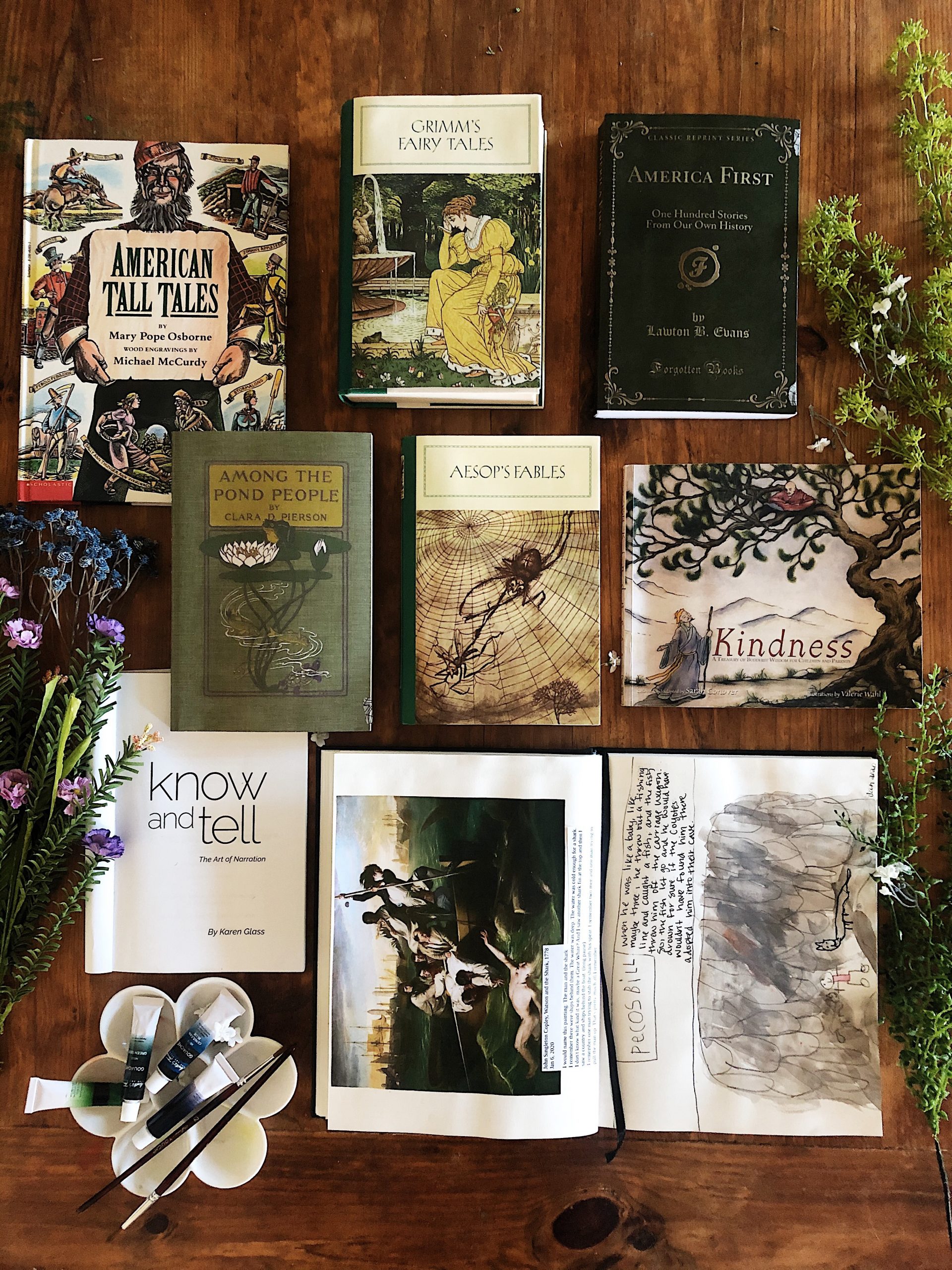 Like so many other Charlotte Mason fans, I knew that narration would be the heart of our education. After all, it seemed easy enough. Broken down, it’s essentially telling back in your own words what you’ve read, heard, or seen. My kids do this all the time! They tell me stories about their nature finds, or they tell me about a silly conversation they had with each other earlier in the day. They narrate a rundown of their entire day to their dad during dinner. It already felt like a natural part of our lives that I thought narration was going to be a piece of cake. Ha!

Fast forward a few months in and you would find me cringing at the word narration. Needless to say, we had a very rocky start. I would read from our history book, then ask my six year old son to tell me what he heard. He would just stare at me with a puzzled, horrified look. His go-to answer was almost always, “I don’t remember.” Eventually, he stopped saying he didn’t remember and just shut down on me tight lipped, arms crossed, head down. NOT gonna happen Mom!

I sighed, and resolved to hold off on oral narration thinking either he wasn’t ready, or it wasn’t for us. We replaced it with meaningful conversations after every history story, which was great actually! We would read together and talk about what moved us, what made us laugh or even cringe. I might get a conversation going by asking a question like “What was the bravest thing that so and so did?” or “What would you have done in this or that situation?” We continued for awhile with great success. He was understanding the material, and all was well. He also enjoyed (still does) illustrated narrations by painting a picture of his choosing from the history books that we read and then telling me about it (I write his words down). He usually does the watercolor illustrations after we’ve read an entire book, almost like a grand farewell in a way.

But, by the time he was about seven years old, I was getting the nudge to try oral narration again on a regular basis. I knew he needed to work on paying attention a little better and I wanted him to start connecting to the stories that we were reading in his own way. I also needed to know what he was truly remembering from what we were reading. We gave it another go, but again, he gave me the same candid response telling me it was too hard and he didn’t remember.

I took a long look at why this wasn’t working for us. Clearly I was doing something wrong here. And I went on a long search for some in depth guidance. Enter the book, Know and Tell the Art of Narration by Karen Glass written by a Charlotte Mason homeschooling mother of four. I poured into this book the day it arrived. I underlined almost every sentence in the first several chapters. Nodding my head in agreement, kicking myself for making so. many. mistakes. And coming out the other side with so much confidence for the first time ever. I finally had a real tool in my hands to help my children become successful narrators. And this book became and invaluable tool that I turn to when I need the the extra encouragement.

I’m going to start by listing the mistakes I made and how we corrected them after reading Know and Tell and then I’ll outline a few tips and tricks to get you started. But first, I HIGHLY recommend you read the book to get a very thorough understanding of what narration is, why it’s important, how to teach it correctly, and what to do when you run into trouble. It also includes several pages of sample narrations from students of all ages and it will carry you into the later years of school when oral narrations turn into written compositions.

MISTAKE #1
I underestimated how challenging narration actually is.
Have you every personally tried narrating a detailed story? I encourage you to try it out first, and to keep practicing throughout the year on your own. Listen to a high quality book on audio and try narrating back in your own words what you remember, trying to pull out important details or facts. It’s not that easy! It takes practice and it takes time. You might find that you need to stop the audio after every few paragraphs or so before you move on to longer passages, then pages, and then chapters and so on. After I got a good idea of how challenging it was, I realized how much I was asking of my year one student!
CORRECTION: I gave my son shorter passages to narrate. Instead of entire pages, we cut it back to 1-2 paragraphs at a time. He was able to recall more details on his own which really boosted his confidence. I try to read enough from the passage that he isn’t able to memorize word for word. I want this to be his own telling of the story.

MISTAKE #2 (My Biggest)
Because I wanted my son to be a successful narrator, I was trying to “help” by prompting him with questions or answers when I noticed he was getting stuck.
As soon as he asked me “What happened next?” I was all too happy to fill in the blank for him. Or, I would interrupt his thought process when it felt like he was taking too long, to add in what I felt he was leaving out.
CORRECTION: This was probably the worst thing I could have done. First, It took him a long time to get his concentration back after I interrupted, and in the end his narrations weren’t fully his! They were a mix of both of our thoughts together because I was feeding him information. Also, If I would have been patient and let him work it out on his own, I know he would have come up with some more details from the story. I didn’t give him a chance to try.
Now, I wait until he says he’s done, and if I truly feel that he’s left something really important out, I will narrate back to him a few little details and we will move on.

On the days that he says he doesn’t remember, I urge him to tell me just ONE thing, and he can usually muster up something, but I DO NOT re-tell the story. I want him to form the habit of attention and if I tell him the story over again, he will rely on that as a crutch the next time and not pay attention.

In her book, Karen says It’s okay to prompt a narration with part of the answer. Instead of saying, “Tell me what I’ve read,” you might say, “Tell me about Benjamin Franklin’s childhood.” You might even write important names and dates on a board before you read to help them have a more successful narration. One more tip! Before moving forward with a new narration, I’ll ask my son to tell me a little about what we read the day before.
Karen goes into great detail in her book about all of this. It was the MOST helpful section for me.

MISTAKE #3
Not adding a variety of material to narrate from, and not requiring narrations often enough. We love history, but that was the only thing I was asking my son to narrate from even though we were reading several other books a week. He wasn’t getting enough practice, and he was also getting a little bored narrating from the same subject.
CORRECTION: I gradually required narrations from a variety of books throughout the week, such as picture study, fables, fairy tales, the Bible, character study books, and natural history. So now, he narrates every single day (just once a day right now). It’s the FIRST thing we do at table time and it is a top priority. If we only do ONE thing in school for the day, it will be reading/narrating. Speaking of table time…

MISTAKE #4
I didn’t take into consideration my son’s unique personality. We were narrating during morning basket because I wanted his five year old sister to be exposed to it and if she wanted, even chime in with her own thoughts when her older brother was finished. But, on one of the harder days that my son had narrating, I sat down with him later and found out that he didn’t feel comfortable narrating in front of his siblings. I understood! After all, this IS a new “art” that he is practicing and it can be difficult at times. It takes an extreme amount of concentration which is hard to do if you have a two and three year old singing songs and laughing while another sibling is hanging onto your every word. Oh, the pressure!
CORRECTION: We started doing narrations at table time. This is when I work with each child individually for the subjects that they do at their own level such as writing, math, la, and now narrations. He gets a semi-quiet hour of pressure free of one of one time working just with me.

I’m sure more mistakes will be made, but we have our footing planted pretty firmly, and our confidence in his ability to narrate and my ability to help him is growing every day.
I have taken the time to make him a beautiful book transcribing for him all of his oral narrations, adding in his illustrations and coloring pages. Now, this isn’t necessary, and the most important thing is that the narrations are happening, but to have all of his hard work in one large book for him to look back on is so worth the effort. He’s able to see the fruit of his labor, compare early narrations to current ones, and It’s also a documentation of what we are doing in school if the state comes knocking at our door. 😉

I will link below to the large sketchbook and the The Know and Tell book by Karen Glass. Please feel free to reach out to me on Instagram, or leave a comment here on the blog if you have any questions! I would love to connect with you.

The links in this post are Amazon Affiliate links. You do not have to purchase through them, but if you choose to do so, I surely appreciate the support. 🙂

How I Schedule Our Year-Round Homeschool